This method of tea ceremony is called the “School of the fragrant leaf” Infused Tea Method 撮泡法 [cuō pào fǎ]. The Ming Dynasty began to abandon the popular steamed tea cakes of the previous dynasties, and people began to process and roast loose tea, which also led to the change of tea drinking habits. And what’s the difference between steamed tea and roasted tea? The ceremony will take 40 minutes, including tasting 3 loose teas which you can choose three kinds of tea from our matching categoriess…

During the Ming Dynasty, Zhu Quan, the 17th son of Ming Emperor Hongwu, who led a reclusive life as a hermit, then founded a new school of tea ceremony, the Infused Tea Method 撮泡法. In the Ming period, loose dry tea leaves were used, directly pour hot water on, this method is called the “School of the fragrant leaf” Infused Tea Method 撮泡法 [cuō pào fǎ], which was recorded in Xu Wei‘s 徐渭 1521-1593 poem – <Seven Categories of Making Tea 煎茶七类>), this method is very similar to methods nowadays.

There were nearly 100 kinds of famous tea in Ming Dynasty, the first founder of Ming Dynasty abandoned cake tea and promoted loose tea. Although there were still steamed green cake tea, there were more and more loose tea in steamed green and roasted green tea. The tea production system and tea ceremony underwent an epoch-making change. Zhu Quan’s book <Tea Notes 茶谱> has not only improved the tea ceremony art since the Tang and Song Dynasties, but also laid a theoretical foundation for the development of tea drinking in the Ming Dynasty and later literati. Read More Except for the areas where the ecological environment is not suitable for the growth of tea trees, tea plants had been planted in the places where no tea has been produced. During the complete victory period of tea development, sun dried tea, dark tea and flower tea had been added, such as orange tea, lotus tea, other flowers. For the needs of war, loose tea were steamed and piled into black color and pressed into blocks, it is conducive to transportation and storage.

Because people in Ming Dynasty drank loose tea in strips, tea storage and baking utensils were more important than those in Tang and Song dynasties. Before drinking tea, washing tea sets with water was unique to the people of Ming Dynasty, these new tea sets were finalized in Ming Dynasty. From Ming Dynasty to modern times, the varieties of tea sets used by people had not changed much. Only changes in the style or texture of the tea set. Tea bowls in Ming Dynasty were still made of porcelain, but due to the change of tea types, the prevailing tea fighting in Song Dynasty began to decline, and the way of drinking tea changed. At this time, the tea bowls used had changed from black glazed ones (bowls) to white ones or blue and white ones. The white porcelain of Ming Dynasty has high artistic value, which is called “sweet white” in history. White porcelain tea cup has beautiful shape, well proportioned, refined materials and elegant style, which occupies an important position in the history of tea set development. Compared with the previous dynasties, the innovative tea sets in the Ming Dynasty were small teapots and tea washes, and the improved ones were tea cups, which were made of pottery or porcelain. During this period, the white porcelain tea set and blue and white porcelain tea set in Jingdezhen, Jiangxi Province, and the Zisha tea set in Yixing, Jiangsu Province were greatly developed. No matter in color and shape, variety and style, they entered a new era of extremely exquisite. 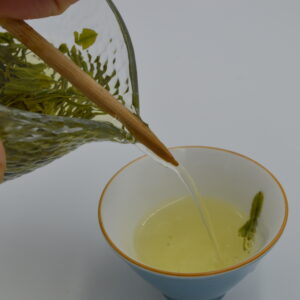