Fangbao tea, is one of the basket type fried and pressed dark tea. It originated in Guanxian County, Sichuan Province, is a main variety of West roadside tea. It is named because the raw tea is built and pressed in a square strip woven bag. In the past, tea along the west road was carried by horses, each carrying two bags, so it was also called “horse tea”. The raw materials of fresh leaves of fangbao tea are coarser and older than south roadside tea. It is made by cutting 1-2-year-old mature branches and directly sun drying as Mao Cha. The form pressing process of square tea includes steaming tea, holding pile, weighing tea, frying tea, building bag, sealing bag, burning bag and airing bag. West Road side tea, referred to as west side tea for short, is a border selling tea produced in Guanxian county and north Sichuan Province. It is packaged in woven bags. The rectangular bag produced in Guanxian county is called square bag tea; the round bag produced in Beichuan is called round bag tea. Now the round bag tea has been discontinued and processed according to the specification of square bag tea.
Yigong ecological tea farm is the highest altitude organic tea production base in China and the earliest tea farm in Tibet Autonomous Region. The unique geographical environment and climate conditions of the tea farm have created a pure and ecological environment in the tea field. Yigong tea farm is rich in snow plateau tea. It was founded in 1960 and had introduced Sichuan medium and small leaf tea plants from Mengding tea farm in Mingshan County, Sichuan Province, and successfully adopted sexual propagation. The old tea tree of Linzhi tea can still be seen now, and now, it is the colorful scenery of a thousand mu tea garden. Today, there are still more than 400 workers in Linzhi tea farm, almost all of them are Tibetans.
The Tibetan tea produced mostly refers to the tea sold to Tibet. It is generally produced in Hunan, Sichuan, Yunnan and other places, not in Tibet. “The most authentic Tibetan tea” of Linchi is well-known, it is not only produced in Nyingchi, but also sold in Tibet. Because of its high quality and mellow taste, the price of Linzhi’s Tibetan tea is more than ten times higher than that of other provinces. Even so, the output is often in short supply. Besides the traditional production of dark tea, there are also a lot of black tea and green tea.
The melting snow water from the snow mountain converges into a stream, murmuring among the mountains and forests, the Yigong river flows slowly, and there are many fruit trees planted in the garden. In early autumn, those pears, apples, grapes and nectarines are very sweet. The melting snow water on the snow mountain converges into a stream and moistens the tea trees all the year round. There is also a famous iron mountain in front of the tea garden. The iron produced by Yigong is of excellent quality. Therefore, Yigong is also a famous producer of Tibetan knives with exquisite workmanship. 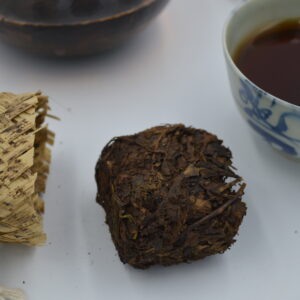