This method of tea ceremony is called the “School of the foamed Jade” Whisked Tea Method 点茶法 [diǎn chá fǎ], the ceremony will take 40 minutes, from grinding tea leaves to drink tea in bowls, from the Song tea histroy to Japanise Matcha…

In the Song Dynasty, most upper class families enjoyed 龙凤团茶 [lóng fèng tuán chá] tea  cakes with dragon and phoenix patterns and Tea-  Competitions 斗茶 “Tea fights 斗茶图” became polular, in order to determine the best teas in the country. At the same time the art of making tea has been developed by the Whisked Tea Method 点茶法. “Grinding Tea Picture 撵茶图” was painted by Liu Songnian 刘松年 1155-1218). The book written by Zhao Ji 赵佶  (1082-1135) – the 8th Emperor of Song reign, <Treatise on Tea 大观茶论> described the mainstream of tea ceremonies at that time. In the Yuan Dynasty, this method spread throughout the population.

During the Song Dynasty, the art of tea has been refined, the tea powder should be infused with hot water and beat up with a bamboo whisk until frothy, a master work was that foams remained as long as possible. This method is called the “School of the foamed Jade” Whisked Tea Method 点茶法 [diǎn chá fǎ].

In the Song Dynasty, there were 101 states produced tea, and more than 90 kinds of famous tea, white tea was added. Dragon and Phoenix tea cake was the main part of tribute tea, steamed green tea and cake tea were the main parts, loose tea came from Zhejiang tea producing area. Tea production technology and tea quality were improved in Southeast tea area, tea was widely cultivated in Huainan, Jiangnan, Zhejiang, Jinghu and Fujian, and the quality of tea was higher than that of Sichuan. Southeast and Sichuan tea producing areas in the Song Dynasty, the transformation of two tea economic status formed two tea political systems. Cai Xiang’s <Tea Record 茶录> and Zhao Ji’s <Treatise on Grand Sight of Tea 大观茶论> have all mentioned the site of “Beiyuan Tribute Roasting” Beiyuan tribute tea garden, which is located in Jianzhou, Fujian Province, the relics of stone inscriptions in Beiyuan tribute tea garden of Song Dynasty were discovered on the hillside of Linlong, Baoqian natural village, Peiqiao village, Dongfeng Town, Jian’ou City, Fujian Province in 1985.

In Tang Dynasty, tea was generally green, and celadon bowls and white bowls were equally important. But in Song Dynasty, tea color was white, and tea fighting became popular. Whether the tea foam sticks to the wall of the bowl is the sign of the victory or defeat of the tea fight. The loser is the one who first forms tea marks on the bowl. This has something to do with the quality of the tea and the technique of whisking it. In order to meet the needs of tea fighting, the Song Dynasty put white tea in a dark bowl, with clear contrast and easy inspection. Cai Xiang pointed out in his <tea record> that “the color of tea is white, and tea bowl should be black.” “green and white tea bowls, but it’s not necessary for a tea fighter.” Therefore, the Song Dynasty paid special attention to black glazed tea bowls. Because this kind of tea set was popular all over at that time, the northern kilns where white porcelain was used to produce to in the Tang Dynasty also made some black porcelain, and other tea sets were handed down from generation to generation. However, because their products do not fully meet the special requirements of tea fighting, the tea drinking art of Song Dynasty is not as representative as that of black glazed porcelain.

People in Song Dynasty still drank cake tea, and there was no great change in tea processing methods, so the tea drinking methods and utensils were almost the same as those in Tang Dynasty. When people drank tea, they had to crush the cake tea, sift it into powder, and then fry it or whisk it. It is just that the tea roasting before tea milling was not as emphasized as that in the Tang Dynasty. Only the aged tea can be roasted, if it is new, it will not be roasted any more. Later, the method of frying tea was gradually abandoned by the people of Song Dynasty. 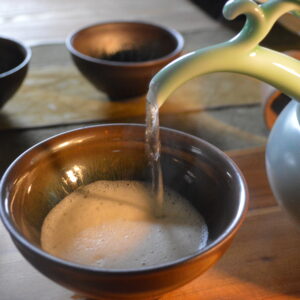