Direction: Handpainted Tea-Table Runner is good for a dry pour method of infusing tea.
Artist: Wenzhuo Liu
Material: cotton and flax textile
Size: 40cm x 140cm
Color: Beige & Dark Brown
Detail:
All Paintings are unique.
The material is washable and 100% natural.
Introduction:
In ancient times, the immortal crane was “below one bird and above ten thousand birds”, which was second only to the Phoenix. The pattern woven by the official clothes of officials in the Ming and Qing Dynasties was immortal crane. At the same time, the immortal crane is the leader of the feather nationality because of its sage-like character and its outstanding behavior like that of immortals, known as Immortal’s demeanor and Taoist priest’s spirit 仙风道骨. It has been known as “first grade bird” since ancient times, which means the first on top. First grade is the name of the highest official rank in ancient times. All civil and military officials below the emperor are divided into nine grades, and first grade is the highest. Crane is also the most noble bird among birds, representing longevity and wealth. 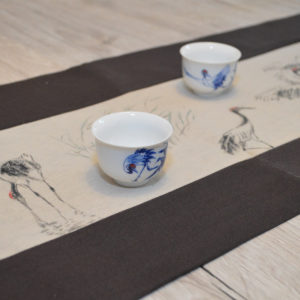 You're viewing: Eight Immortal Cranes – Handpainted Tea-Table Runner
Out of stockAdd to cart