Rated 5.00 out of 5 based on 1 customer rating
Unverified overall ratings (1 customer review)

Porcelain tea wares from the porcelain capital of “Jing De Zhen”, which has been produced porcelain for over 1700 years. Jing De Zhen porcelain has been created its own four special features, those are : “White like jade, bright as a mirror, thin as paper, sound like a chime.” The technique of combining painting and porcelain firing first has started in the Tang and Song dynasties and became popular in the Ming and Qing dynasties. Since gaoline of Jingdezhen has more mineral substances and firing temperature up to 1340°C, Jingdezhen porcelain belongs to high temperature porcelain (above 1200°C), other places’ porcelains can not compare, for example,   cheap Dehua porcelain is low temperature porcelain only around 700-800°C. White porcelain and blue-and-white porcelain tea sets are the most popular, teapot, appreciation cup, fairness cup, tureen, and coaster have the largest varieties, designs and colors. White porcelain tea set can set off a true tea color and taste, and display its natural beauty. 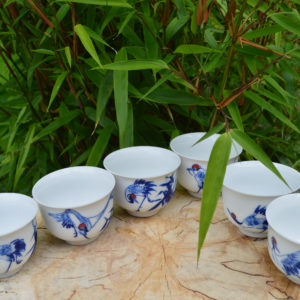