Pu’er Xiaotuo small bowl tea , produced in Yunnan, is one of the dark tea types, belonging to the pressed tea among the dark tea. Pu’er Xiaotuo tea is more convenient to drink than other pressed tea, because it divides each consumption into small solid packages. After brewing, the color of the soup is red and strong, the aroma is unique, the taste is mellow, with a sweet aftertaste, and it still has fragrance after five or six times of brewing. It’s refreshing after drinking.

Yunnan Tuocha is one of the most famous teas in China. It is rooted in China and originated in Xiaguan, Yunnan and has been more than 90 years since it came out. Yunnan Tuocha was created in Xiaguan of Dali, so it is also called Xiaguan Tuocha. Tuo tea production has a long history, it is derived from Tuan Cha tea ball. It is said that it got its name because it was sold in Tuojiang area of Sichuan Province in the past. The modern shape of Yunnan Tuocha was created in the Guangxu period of the Qing Dynasty. It evolved from the so-called “girl tea” (also known as private tea) in Jinggu County of Simao Area into the shape of modern Tuocha.

In the late Qing Dynasty, the tea distribution market in Yunnan gradually shifted to Xiaguan with convenient transportation and developed industry and commerce. As early as 1902, Fuchunhe and other tea makers in Xiaguan began to develop Tuocha on the basis of a kind of tea called “Tuancha ball tea”. It was successfully shaped in 1917, and its shape was unique, like a bowl and mortar. Xiaguan tea merchants changed tea ball into bowl shaped Tuo tea, which was transported to Chongqing, Chengdu and other places in Sichuan Province for sale through Kunming. Now, the production quantity and quality of Yunnan Tuocha have been developed and improved, and sold well all over China.

Because the Yunnan people used to call massive objects “Tuo 坨”, it was initially named “Tuocha 坨茶”. This kind of Tuo tea produced by Xiaguan tea factory in those years was sold to Xufu (now Yibin area) in Sichuan Province. It was brewed with local Tuojiang water and had a good taste. Tuojiang River water and Xiaguan tea, the perfect combination of famous tea and water, make the reputation of “Tuocha” double, over time, “Tuocha 坨茶” will gradually evolve into “Tuocha 沱茶”.

After a long period of careful storage, it naturally aged. Its soup color is red and brown, bright, mellow, sweet and smooth, and its fragrance is simple and deep. Yunnan Tuocha is mild and suitable for all ages. 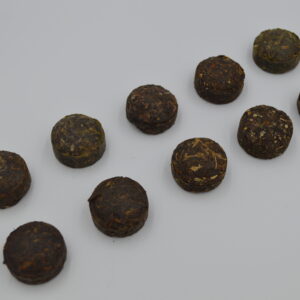