Zhejiang, Jiangsu and Anhui Tea Workshop
Origin: Huo Mountain, Anhui Province
Harvest: 2021 spring tea, Yellow big tea varieties, the picking time is 7 days before the Qingming Festival. The picking standard is one bud one leaf whole flush from Huang Da Cha tea trees.
Direction:
use covered tea bowl or glass to brew 4-6 rounds and above (100″C, 3-5 mins)
Introduction:
Huoshan Huangya yellow bud has a long history. Its production can be traced back to the Western Han Dynasty, with a history of more than 2000 years. Huoshan Huangya flourished in the Tang and Song Dynasties and was listed as a tribute in the Ming and Qing Dynasties. Huoshan Huangya was a local famous tea in the Tang Dynasty and was favored by foreign merchants. In the Song Dynasty, Huoshan yellow bud changed from steamed green cake tea to loose tea, and the tea making method was more refined and unique. But most of the green killing process is steaming tea. In the Ming and Qing Dynasties, the production technology of Huoshan yellow bud has been greatly improved, and the technology is becoming more and more perfect. In terms of preparation method, the “killing green” has been changed to frying, and there has been a “stuffy yellow” process, and tea drinking has been changed from cooking to brewing. The Ming Dynasty is a glorious era for Huoshan Huangya to carry forward the past and forge ahead into the future. During the Shunzhi period of the Qing Dynasty, Huoshan Huangya entered the imperial court and was enjoyed by the royal family, won the gold medal of Panama world expo.
Huoshan Huangya’s modern handicrafts basically follow the tea making methods of the Ming and Qing Dynasties, which is the inheritance and development of the ancient tea art. Huoshan yellow bud tea culture is an important part of Chinese tea culture. In the long-term production practice, the hardworking people of Huoshan have formed the unique technology of Huoshan yellow bud tea through continuous exploration and summary, which has added a wonderful stroke to the connotation of China’s tea culture. There are many poems, legends and documentary records about Huoshan Huangya in history, which are full of charm and are a valuable spiritual wealth.
Huoshan huangda tea has strong stems and fat leaves, and the leaves are in strips. The stems and leaves are connected like fishing hooks. The stems and leaves are golden and brown, with oily color, dark yellow and brown soup color, and yellow and medium brown wet leaf. It has a strong mellow taste and high and tender burnt aroma. The processing technology of Huoshan huangda tea includes frying tea, initial baking, stacking and baking.
Yellow tea is a slightly fermented tea. Its various quality characteristics are biased towards green tea. Its aroma and mellow taste are suitable for most people. At the same time, it improves the bitter taste of green tea and increases the fermented tea. According to the tea quality inspection center of the China’s Ministry of agriculture, there are 46 kinds of aroma components in Huoshan yellow bud. At the same time, it is also rich in biochemical components such as amino acids, tea polyphenols and coffee. It has the effects of reducing fat and weight, protecting teeth and eyes, improving intestines and stomach and enhancing immunity. 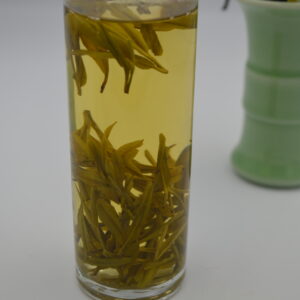