Wufeng Mao Jian originates from the Wufeng Tujia ethnic minority autonomous county in the Southwest of the Hubei Province, this county is a offset of the Wuling mountain range (the Yunnan-Guizhou Plateau). This area also has a clear climate characteristics of Yangtze river valley, the soil is rich in zinc, selenium and other beneficial trace elements, which are very suitable for tea growth, big tea trees grown on both riversides are so thick that two men can get arms around. Wufeng Mao Jian is green tea, top qualities are only used tender spring sprouts or 1 shoot/1 leaf.

One night, Emperor Qianlong (1711-1799), Aisin Gioro Hongli read a lot of memorials and felt sleepy. Seeing this, the palace maid quickly made a cup of tea and put it on the imperial table. Tea water vapour rose like clouds, opened up a sweet and mellow fragrance, Qianlong breathed in the tea fragrance, it could clean his brain and clear his eyes. When he saw it, the tea in the cup was like the shape of a peach blossom in bud, stood upright in the cup. Tea water vapour like a cloud surround him, the “immprtal air” flowing in his body, the whole body was comfortable, and the internal power doubled. “Good tea, rarely good tea,” he clapped and asked the palace maid “where does this tea come from?”, she replied “this tea is the Shui Jin Si Tea 水尽司茶 offered by Changle County (later renamed Wufeng, Wufeng Tea)”. Qianlong said excitedly “when I visited the south of the Yangtze River, I heard about the famous tea from this place. I taste it today, it has a well-deserved reputation. ” Then he took a few more sips, tasted, and said with appreciation “it’s really an immortal tea”.

Emperor Qianlong drank this tea for many days, and he felt that his appetite was increased, his spirit was refreshed, his ears were clear and his eyes were bright, and he had the wonderful effect of becoming young again. One day after the early morning, Emperor Qianlong asked the palace maid to make a cup of Shui Jin Si Tea. He took a few drinks, and he felt relaxed and happy for a while, and his passion burst out. As soon as he was excited, he wrote four characters: “Water Immortal Fragrant Tea 水仙香茗”. He expressed his high praise for this tea and asked the court to send the inscription to Changle (Wufeng) County Yamen to show the emperor’s favor. Since then, Water Immortal Fragrant Tea had become a tribute of the imperial court. 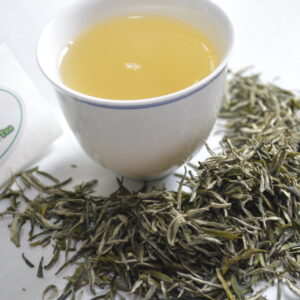