Color painting, also known as colored glaze, it is one of the traditional decorative techniques of Zisha. It was founded in the Kangxi and Yongzheng periods of the Qing Dynasty. It first uses glaze on the fired Zisha body to pile up the bottom layer of the pattern, then draws it in color, and then fire at low temperature. There are generally two ways of colored glaze decoration, one is colored glaze painting, which includes flowers and birds, landscapes, figures, patterns, calligraphy and ornaments, commonly known as “double skin glaze”. One is to pour glaze on the utensils. It is commonly known as “single skin glaze”. There have always been two fundamentally opposite views on Zisha colored glaze decoration, one thinks that it is extremely exquisite and the color is dazzling, and the other thinks that although it improves the decorative effect of Zisha, it masks the unique material beauty of Zisha.
Engraving means carving words or pictures on wood or stone with a knife, as is the case with the engraved Zisha pottery, that is, carving words and pictures on the walls of Zisha pottery. Engraving is a very common decoration technique and the main form of the decoration of Zisha teapots, by leaving poems and songs, flowers, birds, insects and fish, and landscape and figures on teapots, the art of literature, calligraphy, painting and seal cutting has been added to the teapots.
Purple-clay 紫砂 [zǐ shā] is famous of high in iron and silicon contents, featuring high plasticity, the glossier surface the more useages of brewing tea. Tea sets made from purple-clay is not normally glazed. A finished product is primarily purple, thus it is named. This pottery can be divided into different colors, such as purple-brown “purple clay” which is in amaranth or light purple; gray-yellow “green clay” in gray or gray-blue; vermeil “red clay” in red-brown. Purple-clay tea set has a long history in China. Su Shi, the great scholar of the Song Dynasty, had designed a pot with handle, called “Dongpo Pot with Loop Handle”. In the Ming Dynasty, making loose tea in a small pot was popular, which led to the development of purple-clay pots.
Read Related Tea Blog:
Engraved Zisha – the Main Decoration Technique on Zisha Pottery
Ancient Kiln – Qianshu Dragon Kiln
Yixing Zisha Artists back to the Ming Dynasty 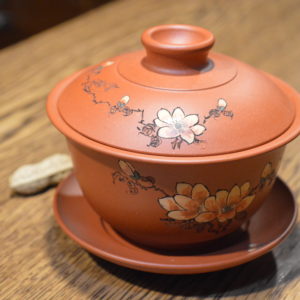