Tang Dynasty was listed as tribute, Biluochun is a famous tea in China and has more than 1000 years of history. Biluochun is produced in the East Dongting mountain and the West Dongting mountain (now Wuzhong District, Suzhou) in Wuxian County, Suzhou City, Jiangsu Province, so it is also known as “Dongting Biluochun”. The high-grade Biluochun tea bud is delicate and tender, 0.5kg dry tea needs 60000 tea buds. After fried, the dry tea strips are tightly tied, white hair is exposed, and the color is silver green, and the green is attractive. It is curled into a snail, and is produced in spring.

It is said that a nun went to the mountain for a spring outing and picked a few pieces of tea leaves. After making them tea, she blurted out that it was so fragrant that it scared people. Therefore, the local people called the tea “scared people fragrant”. During the reign of Emperor Kangxi in the Qing Dynasty, Emperor Kangxi tasted this famous tea. He appreciated it very much, however, he felt that the name of this tea was not elegant, so he named it Biluochun. As for the origin of the name of this tea, in addition to the personal gift given by Emperor Kangxi when he visited Taihu Lake, there is also a legend that Biluochun had the name in the Ming Dynasty. There is also a clever explanation that Biluochun was named after its Bi 碧 green color, Luo 螺 curly like a snail, picked in spring Chun 春 and from the peak of Biluo. 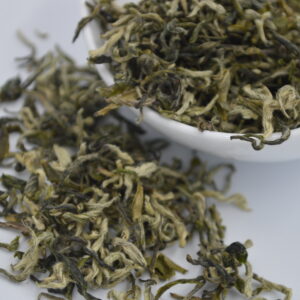