This method of tea ceremony is called Gong Fu Cha 工夫茶 [ɡōnɡ fu chá], the molding period of Gongfu tea should be after the formation of semi fermented tea. It is inferred that oolong tea was founded in the middle and late Ming Dynasty, first in Wuyi, then in Southern Fujian and Chaozhou. How did oolong tea form Gongfu tea when it spread to Chaoshan? The ceremony will take 40 minutes, including tasting 3 Oolong teas which you can choose three kinds of Oolong tea from us, enjoying fragrances by differnt ways, and dicovering the secret of Yixing Zisha teapots…

Chaozhou Gongfu tea art, also known as Chaoshan Gongfu tea, is a unique traditional tea drinking custom in Chaoshan area of Guangdong Province. Chaozhou Gongfu tea was popular in the Song Dynasty. Noble tea originated from Chaozhou Gongfu tea and has a history of thousands of years. According to the textual research, the tea culture was very perfect in the Tang Dynasty. Song and Yuan Dynasties were the development period of Chinese Gongfu tea, and the Ming Dynasty was the heyday of Chinese Gongfu tea, which promoted the tea art to a perfect stage. Chaoshan Gongfu tea art was established in the Qing Dynasty. People in the coastal areas liked drinking tea very much. In Chaoshan, tea was regarded as the best etiquette for guests and improved. Chaozhou Gongfu tea used only semi fermented oolong tea before. Therefore, the molding period of Gongfu tea should be after the formation of semi fermented tea. It is inferred that oolong tea was founded in the middle and late 17th century, that is, the middle and late Ming Dynasty. The time tea drinking method suitable for oolong tea also rose, first in Wuyi, then in Southern Fujian and Chaozhou. After the Gongfu tea art was introduced to Chaozhou, it was combined with the local exquisite habits, changed from the original larger tea cup to a smaller tea cup, and combined with the habit of worshiping merchants, and became an important part and link in the business process, so as to fix the center and program of Gongfu tea art in Chaozhou.

Chaozhou tea ceremony is the most representative tea ceremony in China’s ancient traditional tea culture. A complete form of tea ceremony integrating spirit, etiquette, brewing skills, tea tour art and product evaluation quality is not only a tea art, but also a folk custom. It is a symbol of “local people’s elegant habits and superb measures”. Chaozhou Gongfu tea is listed in the China‘s national intangible cultural heritage list. The Japanese Senchadō tea ceremony and the tea ceremony in Taiwan are all derived from Chaozhou’s Gongfu tea. Drinking Gongfu tea is the most common thing in the daily life of Chaozhou people in Guangdong. After dinner, or when guests visit and meet friends, they are set off with a pot of tea.

It can be traced back to the 17th century AD. the aborigines of Taiwan island had the habit of collecting wild mountain tea to make tea and drink. After the introduction of Gongfu tea in Chaozhou, Guangdong Province to Taiwan, since the late 1970s, it has been intensively studied and extended by countless local tea people, tea parties and teahouses. It has been gradually integrated into the observation of Buddhism and Zen, the modern living atmosphere in Taiwan, and the Japanese tea ceremony model as the main body. It has been transformed into a set of inclusive tea drinking and life knowledge.

Though the term “blue tea” 青茶 [qīng chá] may sound unfamiliar, Oolong tea is a familiar and well-known name, Oolong tea 乌龙茶 [wū lóng chá] is another name for blue tea. First discovered in the 17th century (later than other tea kinds), Oolong in Fujian Province was the tribute ball tea of the Song Dynasty. Half-fermented, processed by both green and black tea techniques, Oolong has green tea fragrance and black tea taste. Brewing in hot water, green leaf edges turn red, earning it the term “green leaf and red edge”. More than 300 years development has led to several kinds of Oolong, and the unique flavor and taste attract more and more Oolong fans. Oolong tea are mainly produced in Fujian, Guangdong and Taiwan areas, according to the orgins, oolong could be divided into four sorts: North Min (闽- short for Fujian), South Min, Guangdong and Taiwan. 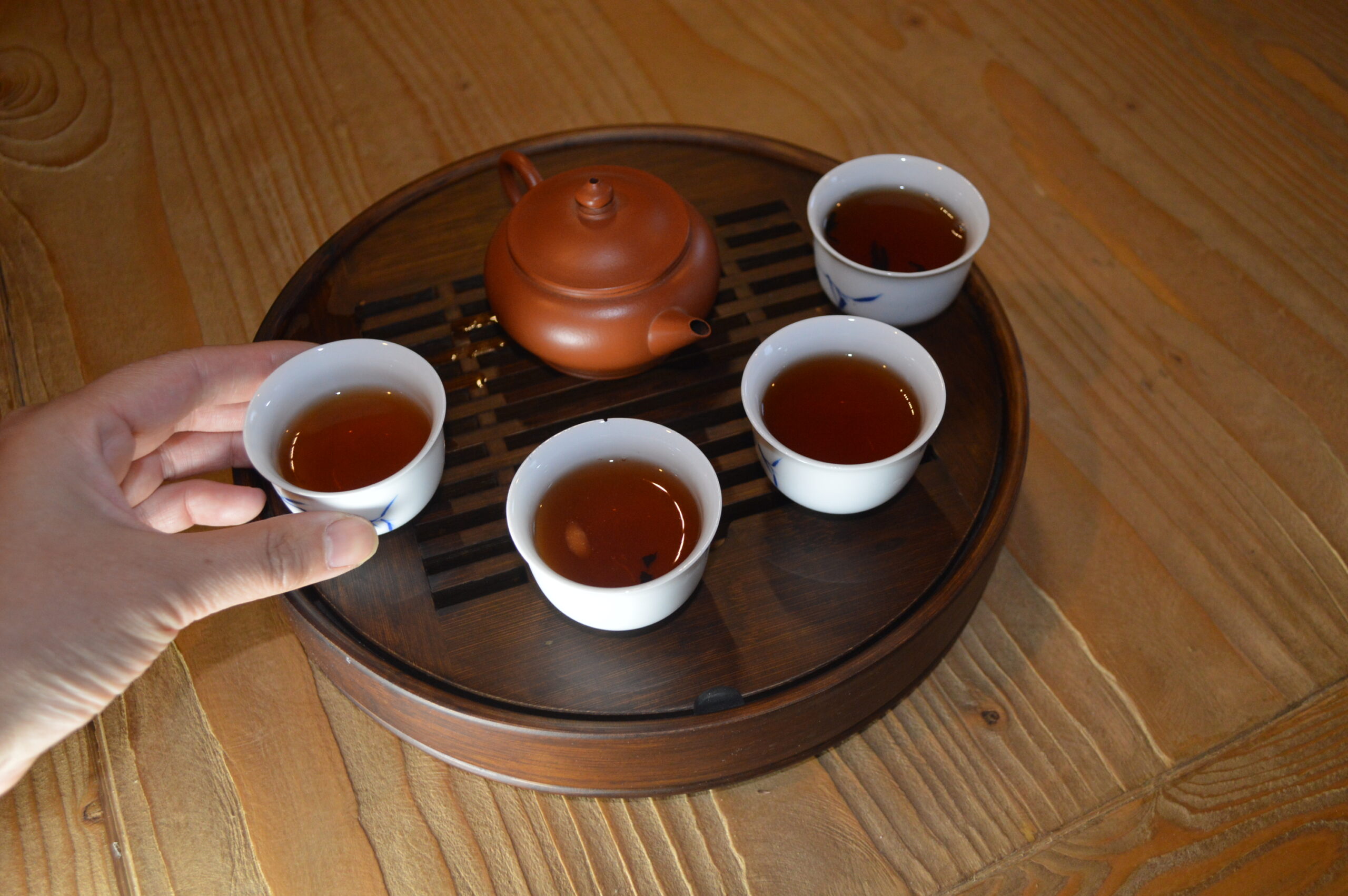