Origion: Dingshu, Yixing Town
Material: bright red purple-clay (Jiangpo Zisha 降坡泥 – Raw ores)
Color: reddish brown
Size: 6.5cm*7cm (135ml)
Firing temperature: up to 1180℃
Contraction ratio: 12%
Time: 2021
Artisan and Sculptor: Ni Xiang 坭香
Direction: Zisha teapots retain flavor well; one should dedicate each teapot to a specific type of tea (black, oolong or dark tea) so that the flavor doesn’t become corrupted. Never wash clay pots with Soap.
Introduction:
In ancient times, the immortal crane was “below one bird and above ten thousand birds”, which was second only to the Phoenix. The pattern woven by the official clothes of officials in the Ming and Qing Dynasties was immortal crane. At the same time, the immortal crane is the leader of the feather nationality because of its sage-like character and its outstanding behavior like that of immortals, known as Immortal’s demeanor and Taoist priest’s spirit 仙风道骨. It has been known as “first grade bird” since ancient times, which means the first on top. First grade is the name of the highest official rank in ancient times. All civil and military officials below the emperor are divided into nine grades, and first grade is the highest. Crane is also the most noble bird among birds, representing longevity and wealth.
Zisha Dui Ni, colored clay laying painting is a school of techniques that combines Chinese painting with Zisha clay. It is different from pottery carving, but it is really painted on the teapot body, Zisha and colored clay pile painting. The art of pile painting of Zisha colored clay began in the Yongzheng period of the Qing Dynasty. It takes different colored clay as ink, based on traditional Chinese painting techniques, and uses knives and pens to pile and draw on the potter body with a certain humidity. Relying on the thickness of clay and the performance effects of different colors of clay, it can show the charm and artistic conception of Chinese traditional pen and ink. Like bas-relief, it has a distinct sense of layers, elegant taste and far-reaching artistic conception.
Purple-clay Zisha 紫砂 [zǐ shā] is famous of high in iron and silicon contents, featuring high plasticity, the glossier surface the more useages of brewing tea. Tea sets made from purple-clay is not normally glazed. A finished product is primarily purple, thus it is named. This pottery can be divided into different colors, such as purple-brown „purple clay“ which is in amaranth or light purple; gray-yellow „green clay“ in gray or gray-blue; vermeil „red clay“ in red-brown. Purple-clay tea set has a long history in China. Su Shi, the great scholar of the Song Dynasty, had designed a pot with handle, called „Dongpo Pot with Loop Handle“. In the Ming Dynasty, making loose tea in a small pot was popular, which led to the development of purple-clay pots.
Read Related Tea Blog:
Engraved Zisha – the Main Decoration Technique on Zisha Pottery
Ancient Kiln – Qianshu Dragon Kiln
Yixing Zisha Artists back to the Ming Dynasty 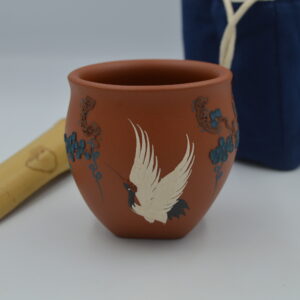