Taiwanese tea people make tea in Anxi local tea garden. The tea tree species, style and technology are almost the same as those made in Taiwan. The price is low and the quality is good. Oriental beauty tea originated in Taiwan, also known as Pengfeng tea. Oriental beauty tea was originally called Pengfeng tea (“Pengfeng” means “boasting” in Taiwan slang). It is said that in the early days, a tea farmer was unwilling to lose because of insect pests in the tea garden, but he chose to sell it in the city. Unexpectedly, it was very popular because of its special flavor. When he mentioned it to the villagers after returning to his hometown, he was accused of boasting. From then on, the name of this tea spread like wildfire. And because the small green leafhopper sucks tea trees, it has more tea polyphenols, after strong fermentation, producing a different flavor.

It is also known as Baihao oolong tea because of its remarkable white tea hair. It is also said that a hundred years ago, British tea merchants presented Pengfeng tea to Queen Victoria of England. After brewing, it looks like a gorgeous beauty dancing in a crystal cup. After tasting it, the queen praised it and named it “Oriental beauty”. It is also said that if a drop of brandy is added to the tea soup of Pengfeng tea, it has a better flavor and is deeply loved by European and American people, so it is called “champagne Oolong”. 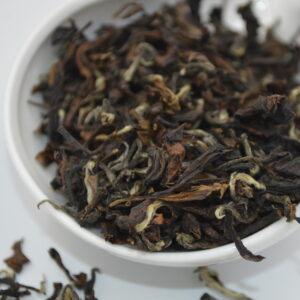